It’s that time of year again: local governments across Texas are considering their budgets for the next fiscal year and setting their tax rates to support such spending.

This year is special for Texas taxpayers because it is a year where most Texans will likely see their property tax bills skyrocket (yet again), despite state lawmakers’ promises that the “historic property tax reform legislation” passed in 2019 should provide relief any day now.

In the most recent Senate Finance Committee hearing, taxpayers were told to relax! Don’t worry, your local governments are going to adopt the no-new-revenue rate (NNRR). It will fix those sky-high bills!

In that same hearing, Chairman Joan Huffman (R-Houston) said she “wanted to remind everyone, as we see these appraisals rising, that homeowners should see a decrease in the overall tax burden because of the ‘historic property tax relief’ [from] bills HB 3 and SB 2, which allows cities the option to lower rates to match the no-new-revenue rate in October, when final bills actually come in.”

The sales pitch from our appropriators was that despite taxpayers seeing sky-high property tax bills in the past—and high appraisals this spring—we shouldn’t worry! They fixed everything in 2019, remember? The cities and local governments are going to lower the property tax rates to the no-new-revenue rate, and everything is going to be rainbows and butterflies after that!

TFR previously expressed doubt in this “out-of-touch positive spin,” and we finally have some municipalities showing their hands with newly proposed budgets. TFR reviewed the proposed budgets and rates of Texas’ five most populous cities, and here is what we found: 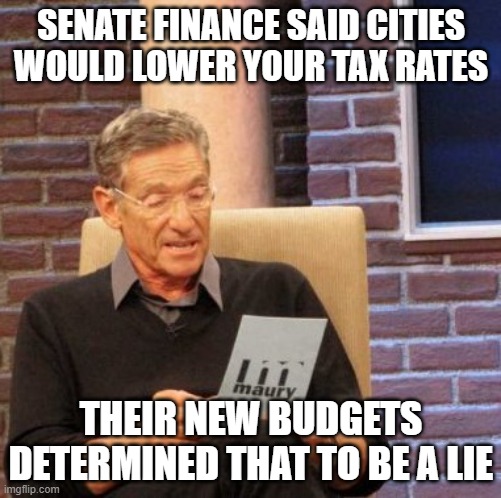 As things begin to heat up and local governments continue to set their new rates and budgets, it is becoming more and more obvious that TFR’s prediction that most of these jurisdictions would NOT adopt the NNRR is coming true.

What does this mean for taxpayers? It means the “historic property tax relief” our lawmakers keep celebrating has yet to lower anyone’s bills, nor will it in the coming year unless there is a major shift in local government fiscal responsibility in the next few months. It is safe to say that without local governments adopting the NNRR, your property tax bill WILL GO UP.

So, what can you do?

If local governments refuse to lower to the no-new-revenue rate, they must hold a hearing for taxpayers to give feedback. It is imperative that you protest these local governments and demand they lower our rates! If they refuse, we must vote every single one out of office.

The same, of course, goes for our state lawmakers, who have been trumpeting property tax relief that no one has seen for years now. TFR has proposed the Texas Prosperity Plan, which would actually provide relief by using the $27 billion surplus to help drowning taxpayers.