Explainer: What Is Taxpayer-Funded Lobbying? 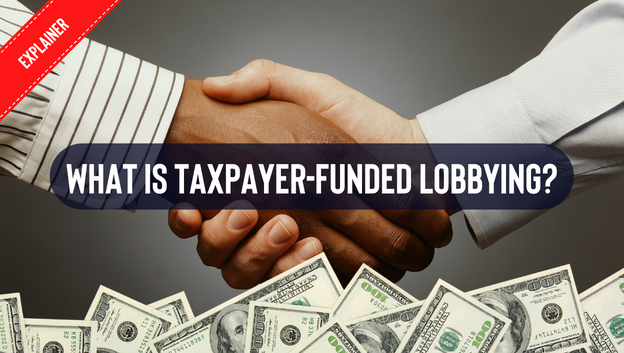 Recently Texans for Fiscal Responsibility (TFR) released its Texas Prosperity Plan focusing on policy goals for the upcoming Texas legislative session set to begin in January of 2023. The plan focuses on three specific issues to reform: 1) Eliminating Property Taxes 2) Freezing the Texas Budget 3) Banning Taxpayer-Funded Lobbying. Just a few weeks ago TFR was at the Republican Party State Convention in Houston where we had the privilege of speaking to thousands of taxpayers and activists about our plan, and the response was overwhelmingly positive, especially when it came to property taxes and budgetary restraint. One of the biggest takeaways from the convention, however, was related to the idea of banning taxpayer-funded lobbying. Seemingly, many of those in attendance knew they opposed the practice in principle but at the same time did not understand what it is or why it is such a problem.

Taxpayer-Funded Lobbying is the practice of local political subdivisions (School Districts, Cities, Counties, etc) hiring lobbyists in Austin to lobby lawmakers to increase the local government’s ability to tax and regulate more. Essentially it is using your tax dollars to hire lobbyists to actively work against your best interests. It is an innately corrupt and immoral practice and a major conflict of interest for taxpayers.

In a Gallup poll in 2011, Americans were asked which institutions they believed had too much power and first on the list were Lobbyists with 71% of respondents agreeing they had too much power. They beat out major corporations, banks, and the federal government. Gallup also periodically does a poll called the “Honesty and Ethics of Professions Ranking” that determines which professions Americans put their trust in. In the recent 2021 poll, lobbyists came in dead last, with only 5% of respondents saying they have very high ethical standards. Although lobbying is continually ranked as untrustworthy and unethical, it remains one of the more effective means of influencing policy in both the federal and state governments. The important distinction to be made between private lobbying and taxpayer-funded lobbying is that private lobbying is typically large private corporations that use their profits and capital to advocate for policy that is beneficial to them. Despite negative feelings toward the practice, lobbying has been ruled as free speech by the Supreme Court which makes banning the practice difficult in general. In 1967 a Supreme Court decision said:

U.S. Supreme Court (1967): [The] rights to assemble peaceably and to petition for a redress of grievances are among the most precious of the liberties safeguarded by the Bill of Rights. These rights, moreover, are intimately connected, both in origin and in purpose, with the other First Amendment rights of free speech and free press.

“Texas should ban the practice of taxpayer-funded lobbying, which allows your tax dollars to be spent on lobbyists who work against the taxpayer.” (YES – 94.29%, NO – 5.71%).

When local governments hire lobbyists it leaves the nearly 30 million Texas taxpayers at a huge disadvantage. How is the average Texan supposed to effectively get their lawmaker’s attention while also working a 9-5 job and simultaneously trying to find time to travel down to Austin and advocate for themselves (using their own free time and expenses) while lobbyists are paid full time to actively work against them? The simple answer is they can’t compete against lobbyists this way and ultimately they lose time and time again in the policy arena as a result. This is one of the main reasons why getting activists involved in state government is so difficult, because it seems like an almost impossible feat to most.

It is immoral to force taxpayers to fund lobbying efforts that work against them. This is especially true when we already elect local officials to do this, and they are effectively hiring out the job we elected them to do in the first place. Our local officials are supposed to be elected to advocate for us, but what they have done is hire the proverbial fox to guard the henhouse. It is time we end this practice once and for all, and end the immoral practice of taxpayer-funded lobbying.

How can you help? Go read the Texas Prosperity Plan for yourself and voice your support for Banning Taxpayer-Funded Lobbying by signing up to support the TPP. Sign up for The Fiscal Note to keep up to date on all fiscal issues that affect Texans, especially our broken property tax system. We CAN end this practice if we amplify our voices loud enough.