Recently, Texas Governor Greg Abbott gave the keynote address at the 18th annual West Texas Legislative Summit in San Angelo, Texas. In the address, he talked about property taxes and other issues in his plan for the upcoming legislative session.

The chief economist for the Texas Public Policy Foundation (TPPF), Vance Ginn, Ph.D., tweeted about Abbott’s bold claim, indicating Abbott revealed that he plans to use a large portion of the estimated $27 billion surplus to pay down the maintenance and operations (M&O) compression rates. However, Abbott seemed to stop short of specifying just how much of that surplus would be used for what he called “the biggest property tax cut in the history of Texas.”

.@GregAbbott_TX: “We will use a large chunk of this money [surplus] to provide the biggest property tax cut in the history of the state of Texas.”🎉https://t.co/eUtcXZj2Y1#txlege @TPPF

I decided to research what this would actually equal in dollars so we would know how to hold Abbott accountable for such a bold claim.

The question that immediately comes to mind is: How would we go about measuring such a vague statement? Is Abbott referring to money that the Legislature has previously allocated specifically for property tax relief, or is he referring to actual cuts in property taxes?

If we look at the often-cited “historic property tax relief” provided by the Legislature in 2019, we see that $5 billion was paid down on M&O for a “7-cent compression” on school M&O. In 2021, $6.1 billion was appropriated to maintain that same compression, yet the “buydowns” did not actually result in property tax reduction—it simply resulted in slower growth of the taxes themselves.

Texans for Fiscal Responsibility (TFR) has written extensively about this bait and switch the politicians in Austin often use to convince you they are cutting taxes despite your bill going up every year. In the chart below from the comptroller’s 2018-2019 report, you can see that tax levies have continued to rise despite lawmakers’ efforts over the years. 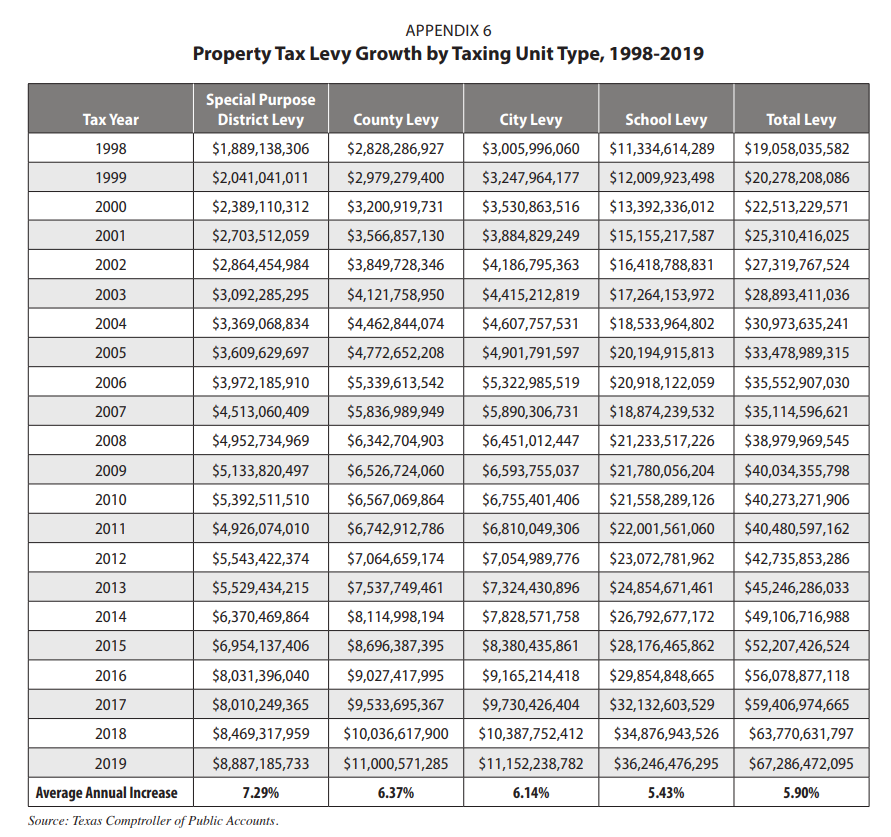 We found that in 2006, a much larger sum was appropriated by lawmakers for property tax relief, totaling $14 billion. Sadly, this only resulted in about $400 less in tax levies the following year, and the tax burdens increased by nearly $5 billion in the next two years, as seen in the chart from TPPF below.

Despite the effect of the $14 billion in paydown being minimal, it seems as though the largest property tax cut paydown in Texas history was at least that.

The projected $27 billion surplus available to the legislators in the upcoming legislative session is already being picked apart by the Austin swamp. TFR has heard reports that of the total projected surplus, roughly $5 billion will be allocated to Medicaid, about $2 billion to school safety measures or border security, and about $6-8 billion to maintain House Bill 3 funding as passed in 2019, which includes the aforementioned M&O compression.

Taking those numbers into account, it appears more than half of the projected surplus has already been spoken for, according to Austin insiders familiar with the process. If true, this leaves taxpayers with a measly $12 billion in available surplus for true property tax relief, less than the aforementioned largest property tax cut given in 2006.

If these numbers prove true (they are just rumors for now), it would be impossible for Abbott to come through on his promise of the “biggest property tax cut in Texas history.”Maybe he has something else up his sleeve, but if the past is any indication of the future, taxpayers will likely get more of the same “slow the growth” tax relief strategy from their lawmakers. Thus far, those plans have not given anyone relief from ever-growing tax burdens—so TFR created one that would.

As part of our Texas Prosperity Plan, we maintain that lawmakers should use every penny of the available surplus to put Texas on a path to ultimately eliminate the property tax while simultaneously making efforts to freeze and cut state spending.

A budget freeze was also recently included in the 2022 Republican Party of Texas platform. In fact, all three of the policy issues included in TFR’s Texas Prosperity Plan made it into the party platform. While we wait to find out whether Abbott really has a plan to provide the “biggest property tax cut in Texas history,” you can read all about our plan HERE.

How can you help? Voice your support for banning taxpayer-funded lobbying, eliminating the property tax, and freezing state spending by signing up to support the Texas Prosperity Plan. Sign up for The Fiscal Note to stay up to date on all fiscal issues that affect Texans, especially our broken property tax system. We CAN put Texas on a path to fiscal sanity and future prosperity if we amplify our voices loudly enough.